How can i help you? 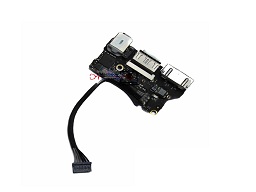 A laptop power connector connects the device to the power supply through a plug. A malfunction of the connector makes it impossible for the laptop to run smoothly from the network, including not charging the battery. If the connector is faulty, it is necessary to spend its repair or replacement without wasting time; the price of replacing the laptop power connector is low. Working on a laptop with a broken power supply socket will eventually lead to the failure of such serious details as a battery or even a motherboard.
Reasons for the malfunction

The reasons for making the connector unusable are few. These include:
· mechanical damage due to shock or falls of equipment;
· sharp jerks over the wire of the power supply;
· carrying a laptop with a charger hanging freely in the socket;
· poor soldering quality.

Under mechanical influences, internal damage to the part occurs, contact breakage or path burning due to the resulting deformation.
Signs of breakage

An experienced user can identify problems with the connector by the following symptoms:
· the battery stops receiving a charge;
· stirring the wire turns off or stops the charge;
· atypical heating of the plug, sometimes it even sparks.

It is better not to do the DIY repair of the power connector for the MacBook pro, MacBook Air, iMac and other brands of laptops, but to contact the service center masters.
Connector repair

At the first guesses of the user about the malfunction of the connector, a diagnosis should be made to accurately determine the defect. For diagnostics and further repair of the laptop brands Acer, HP, Samsung and other popular brands in Dubai you need to bring it to our service center. The wizards will carry out the necessary actions - diagnostics, re-soldering of the part and control testing. The cost of repairing a laptop power connector in Dubai can be found by calling the phone number listed on the website. Also, owners of laptops can repair USB jacks, keyboards and other parts in our workshop.